What do Fort Worth, Birmingham, Dubai, Denver and Atlanta have in common?

All advertise in the first few pages of the July/August edition of Associations Now magazine as locations for your next association meeting.

I’ll confess, Associations Now isn’t typically my top priority. I get to it, but usually not until I throw it in my bag for a flight. And when I pulled it out this month, what I enjoyed most about the July/August edition was the unintentional irony.

Because the four cities mentioned above were hardly alone.  The issue was filled with inserts for Pittsburgh, glossy ads touting the merits of different venues.  It made it appear as thought the primary business of associations is to have meetings.

But then, there on page 50, was an article about lessons from the fall of Blackberry. The article spoke of misreading a market.

And that’s where the irony comes in. Because the reality is that despite the importance of the “annual conference” or big association event, for most groups the majority of their members will never set foot at an association meeting.

And it’s not just webinars and websites anymore.  More and more, people access the web via devices other than their PC—tablets and phones.  Yet a mobile strategy eludes most associations. If your group hasn’t thought of one, see page 50 of the July/August Associations Now—watch out, the market can shift.

Maybe that’s an advertisement I should put in the next edition.  But then again, I can’t offer proximity to the airport, shopping and nightclubs or single floor meetings space.  So I wouldn’t fit in. 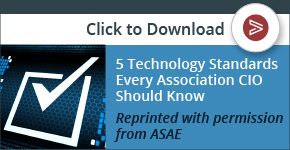 Streamlining Your Organization for Success

Congratulations to our client @mojaloop on another successful online event! twitter.com/mojaloop/statu…