In the 1960s, researcher Everett Rogers published a work called Diffusion of Innovations that aimed to explain how, why, and at what rate new ideas and technology spread through cultures. Nearly half a century later, his research is still the guiding rule across various industries—including the technology space—for predicting and driving technology adoption strategy. Since standard-setting organizations and technology-focused consortia are largely in the business of developing and promoting the adoption of new technologies, Rogers’ work has some very strong relevance.

At the core of Rogers’ theory is a bell curve, which illustrates the different stages of innovation adoption. The ideology behind that curve is two-fold:

First, it highlights the very real influence that different types of audiences or customers have on one another. For instance, early adopters want to get their hands on new inventions quite soon after they are introduced. They do not, however, want to be first, and thus rely on the so-called “innovators” to take the proverbial test drive and work out some initial kinks. This progression of influencer-to-influenced behavior flows through the curve.

Second, the curve demonstrates that a successful innovation should progress through the entire curve and not get stuck at any particular stage. In other words, a technology that does not diffuse through all of the stages is most likely one that will die.

There is much scholarship that points to a particular place in the curve where innovations tend to hit the greatest point of resistance—the intersection between “early adopters” and the “early majority.” That is, if the “early adopters” haven’t convinced the “early majority” that the technology is worth adopting, it simply won’t diffuse further through the curve. This inflection point is often known as the “innovation cliff” or the “tipping point.”

This cliff, then, is exactly what technical consortia and standards-setting organizations should focus on in their strategic planning. How is the organization going to make sure that its specifications/technology diffuses through the entire target ecosystem? Here are some points to consider in answering that question: 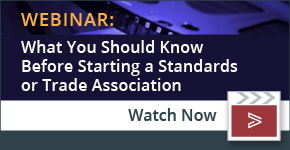 Looking for an Executive Director? Here are five tips ...